Since 1968, Bill Snyder Family Stadium has not only served as a home away from home for generations of K-State fans but has become a platform from which the University is beamed throughout the country on national television. The Shamrock Zone will revolutionize the gameday experience for thousands of Wildcats fans with upgraded fan amenities and premium seating that will transform the south concourse of Bill Snyder Family Stadium and Bramlage Coliseum.

The Shamrock Zone will transform the south concourse by providing a completely covered walkway area. For the first time in the history of Bill Snyder Family Stadium, there will be permanent concessions and restrooms on the south concourse. This will allow fans easier access to utilize the 24 new points of sale and the spacious 2,100 square foot men’s and women’s restrooms, while also alleviating congestion and lines to those facilities on the west and east sides of the stadium. Two new video boards will be added to the SW and SE corners of the stadium to mirror the two video boards on the north end of the stadium, along with adding a ribbon board underneath the new Shamrock Zone Club level. A new high-point sound system will be added to the top of the Shamrock Zone, along with numerous fill-in speakers to the south and east lower bowl to offer fans an enhanced audio experience on gameday.

A new 13,500 square foot club space will replace the current Legend’s Room area (7x larger!) and be accessed from the concourse at Bramlage or by using the newly created vertical circulations located on the west and east side of the space. The space will feature a large bar and buffet, showcasing massive 33’ x 13.5’ screens to watch your favorite Wildcat replays. A new kitchen will service fans at both football and basketball for the new lounge space with high ceilings, flat screen televisions, and plenty of seating and tables to enjoy food, drinks, and friends. On football gamedays, this space will be utilized for fans sitting in the new Shamrock Zone premium seats. Plans for this space include 318 club seats, 10 suites and 10 loge boxes. For men’s basketball games, the Shamrock Zone will serve as a club area from pre-game to post-game for Ahearn Fund members within a certain membership level (details to be determined).

Other improvements in Bramlage Coliseum include extending doors and walls at the NW and NE points of entry, adding nearly 4,500 square feet of new concourse space, as well as faster access to enter Bramlage. A new dining terrace will be built on the north end of Bramlage seating overlooking the basketball court, as well as cosmetic enhancements including limestone walls on the concourse.

Enhance the overall game day experience for all fans with the addition of fan amenities and new premium seating.

Set the vision and build off the foundation to continue serving as the northwest gateway to campus that creates a recognizable institutional landmark for students, alumni, faculty, staff, and fans.

Bill Snyder Family Stadium features unique premium seating opportunities designed to provide Wildcat fans with the best fan experience in the Big 12. The addition of the Shamrock Zone will offer a luxurious game day atmosphere that highlights a spacious club for Wildcat faithful to gather with all-inclusive premium buffet-dining, cash bar, high definition TV’s, and incredible seating that spans the south end of Bill Snyder Family Stadium. Your investment as a premium season ticket holder in the Shamrock Zone allows you to be a leader in making this transformational project possible. We invite you to be a part of the next chapter. For pricing for Shamrock Zone suites or for more information regarding premium seating opportunities in the Shamrock Zone, please contact the Ahearn Fund at 888.232.9074 or ahearnfund@kstatesports.com. 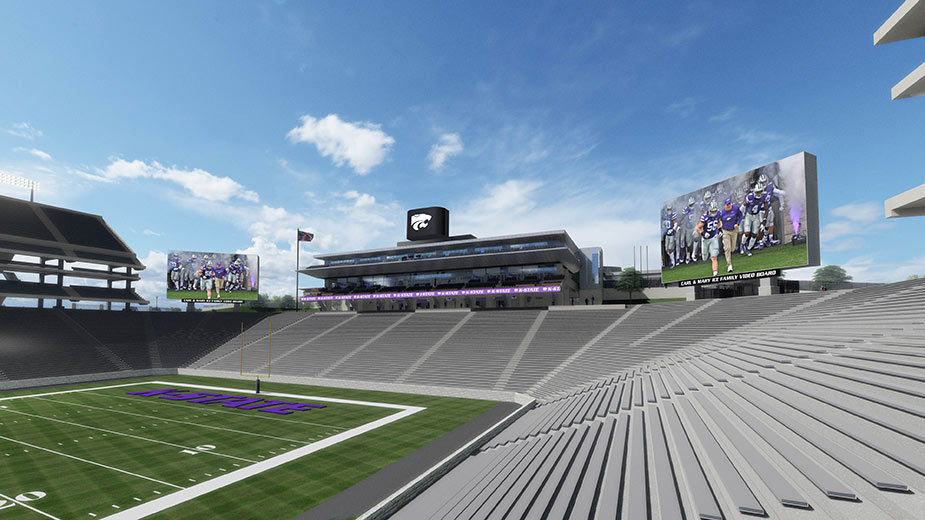 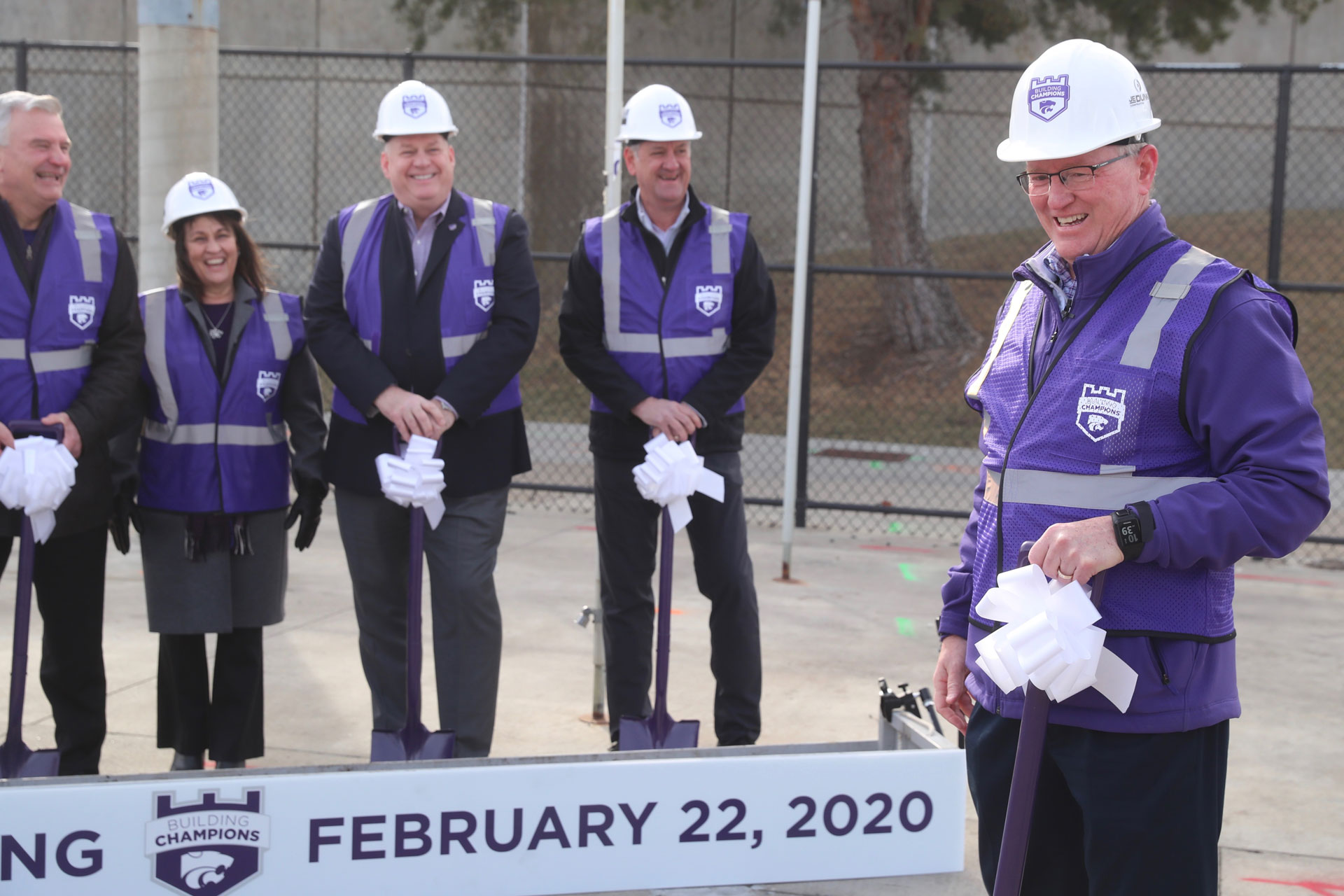 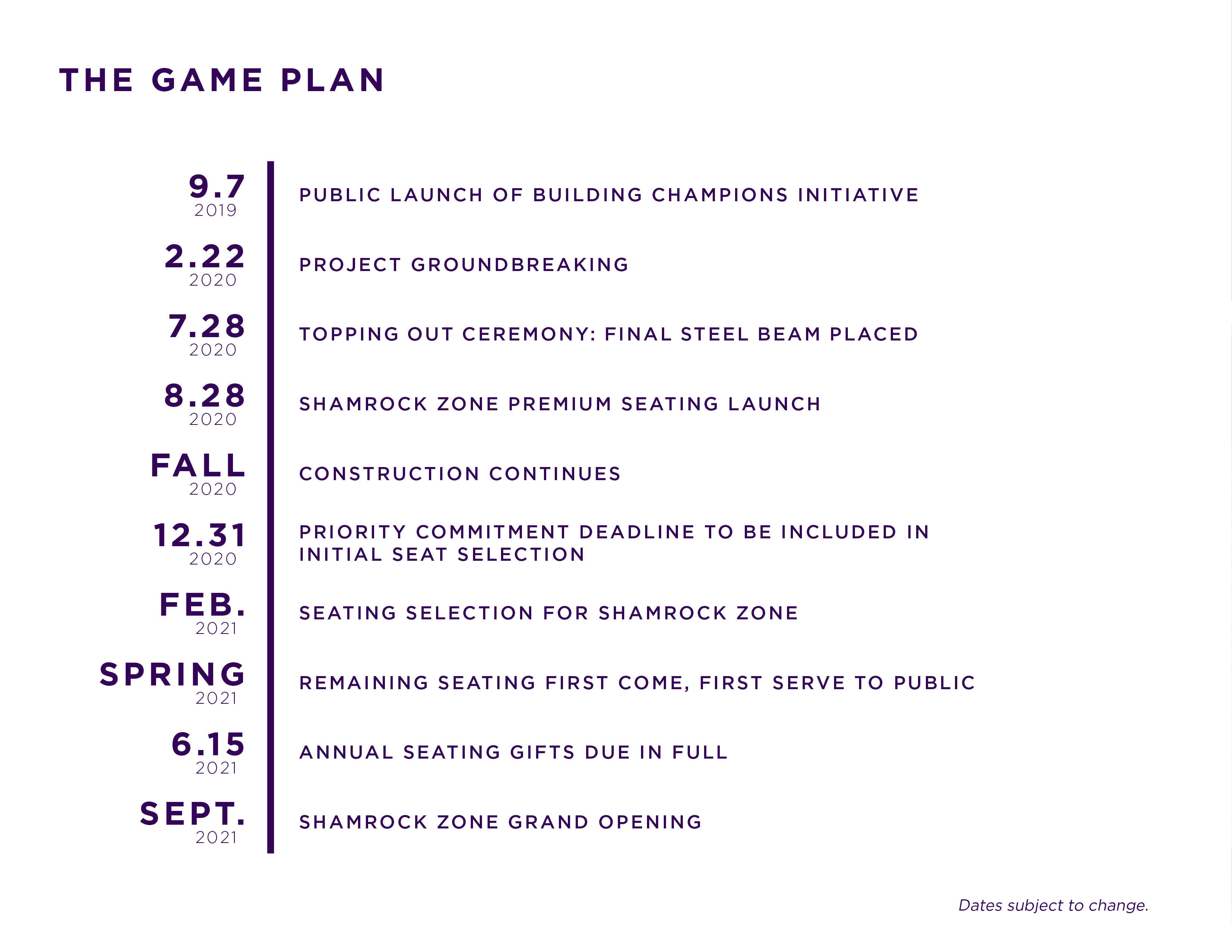 In order to invest responsibly in K-State’s financial future, capital projects are funded through the philanthropic support of K-Stater’s all over the world, with zero tax, state, or university dollars used. By securing premium seating in the Shamrock Zone, you play a large part in making this dream become a reality. To make a contribution online to the Building Champions capital initiative, click here or contact an Ahearn Fund representative at 888.232.9074 for more information.

The Shamrock Zone will set the vision and build off the foundation to continue serving as the northwest gateway to campus that creates a recognizable institutional landmark for students, alumni, faculty, and fans. The Shamrock Zone will enhance the overall game day experience for all fans for both football and basketball with the addition of fan amenities and new premium seating. The new space will create opportunities to generate revenue to ensure the future sustainability and national leadership position of K-State Athletics and will develop a phase approached in our commitment to grow and efficiently manage financial resources.

The anticipated total project cost is $50 million. The Shamrock Zone will be purely funded by the generosity of K-Stater’s through a three-part funding strategy: leadership philanthropy, capital contributions, and annual seating contributions. No tax, state, or university dollars are used in the funding of this project.

The Shamrock Zone will improve the game day experience for ALL fans. One of the main features will be a wider, covered concourse for the south end zone of Bill Snyder Family Stadium, adding 2,100 SF of new restrooms and shorter concession lines with 24 new points of sale. In addition, fans will benefit from two new video boards in the SE and SW corners of the stadium, new ribbon boards under the Shamrock Zone Club, an improved sound system, and enhanced NE and NW entrances to Bramlage Coliseum.

In order to be included in the first round of seat selections, we ask that all fans sign a commitment form and fulfill a 10% capital gift deposit before December 31, 2020. Shortly following the priority commitment deadline, the seating selection process will occur in priority point order. All commitments received after the December 31, 2020 deadline will be seated in order they are received, subject to availability.

Suite, loge, and club season ticket holders in the Shamrock Zone will have the option to select a commitment term of 5 or 7 years. During this term, you lock in your annual Ahearn Fund gift at the original agreed upon level. At the end of the commitment term, the seat-holder will have first right of refusal for renewal.

Shamrock Zone premium seating will be allocated based on Ahearn Fund priority points as of December 31, 2020. Fans who have signed a commitment form and submitted a 10% capital gift deposit will be ranked for seating selection following this date. A letter of confirmation will be mailed immediately following detailing the seat selection date and process moving forward.

In order to provide a fair selection system, fans requesting to sit together will be allocated based on the member with the lowest priority point total of the group. For example, if Donor A has 2,000 Points, Donor B has 3,500 Points, and Donor C has 1,500 Points, the group’s rank and selection time will be based on Donor C's priority points.

Yes - one (1) reserved parking pass will be provided for every four (4) tickets purchased in the suite, loge, or club. Parking selection will occur following seating selection for fans who have committed.

Yes – food will be provided in an upscale fashion with buffet style service stations on gameday and is included in your total annual gift to the Ahearn Fund. Alcohol is not included and must be purchased separately. To ensure high quality, K-State Athletics reserves the right to review and adjust pricing as food costs increase.

Guest passes for suite holders will be made available for purchase on both a season or single game basis. To protect the quality of experience for all premium seat holders in the Shamrock Zone, guest passes will be limited to 50% of the suite seating occupancy. Subject to changes based on codes and capacity.

Upon fulfillment of the capital gift commitment, seats in the Shamrock Zone may be transferred to an immediate family member within the life of the contract by submitting a transfer form of approval from both parties. The receiving party will need to commit to an extended contract and meet the agreed upon annual contribution requirements to receive rights to purchase tickets and parking. It is understood that priority points are non-transferrable.

The deductible portion of this contribution should be determined by reference to the appropriate section(s) of the internal revenue code. Please consult your tax advisor regarding the deductibility of any gift, especially if any portion of your gift was made for the right to purchase athletic tickets.

If for any reason the Shamrock Zone is not available by the 2021 season, those who have committed will be provided with the following options: 1) continuation of your pledge commitment through the completion of the project; 2) your choice of redirecting your capital gift to another project or program or; 3) a refund on your capital gift and elimination of your pledge agreement.

Taking K-State Athletics to the Next Level